DISCLAIMER: I was not paid to write nor advertise this in any way by Bristol University or associates.

According to Bristol University electronics:

The UB20M is a sensor-driven circuit that requires no power supply (!), instead it uses power from a sensor signal to wake up. Suitable sensors are wireless antennas, infrared diodes, piezoelectric accelerometers, and other voltage-generating sensors.

So it’s basically a low power voltage sensor with pico-ampere range quiescent current draw. When I learned about it on Hackaday, I thought it would be a perfect match for lowering standby energy consumption of the PCB I was experimenting with lately: an inexpensive ESP8266+LoRa, battery powered gizmo. My idea was about detecting movement by using a piezoelectric disk and then latching the EN signal high of an AP2112 3.3V LDO.

Looking a bit further down in the Hackaday blog post, there’s an URL where I ordered a completely free sample for testing purposes, sweet.

Dave Jones on the UB20M

About two days later after receiving the free samples by snail mail, Dave Jones from EEVblog published a videblog heavily criticising the marketing machine behind the chip and rightly so IMHO.

Oh well, since I have it on my bench now, let’s see what it actually does?

The board is a [convenient breakout with 3 different configurations][board datasheet] out of which I chose to test the “active-high open-drain” output since it seemed to match my target usecase, plus the other modes have an OD limit of 200mA which is unsuitable for my 600mA application:

The breadboard experimental setup looks like this in my own low tech setup: 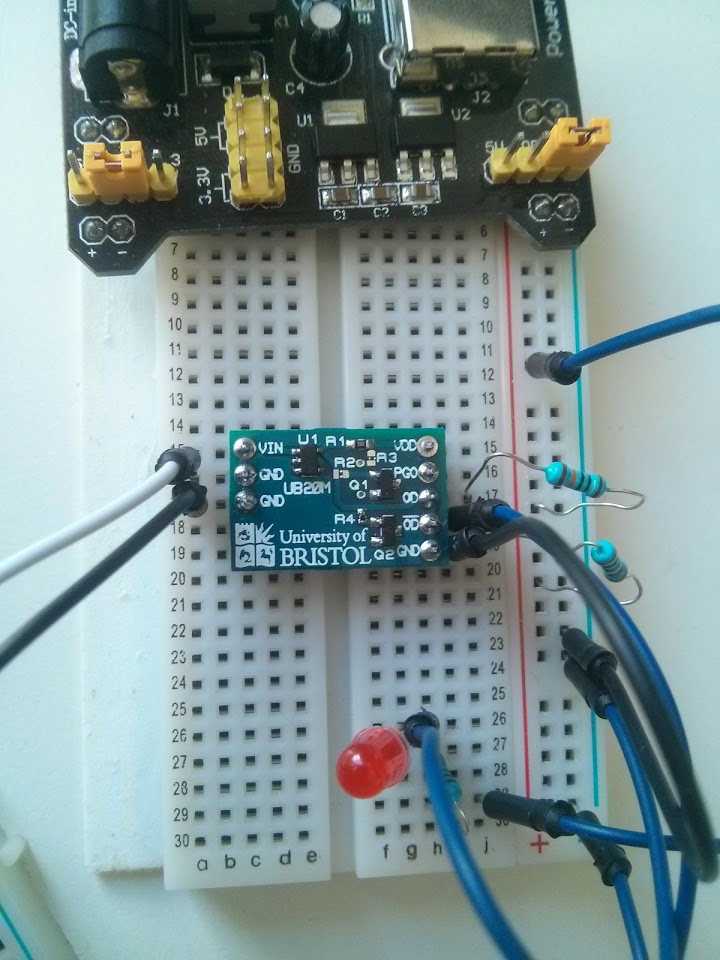 And when connected to a piezoelectric sensor and a L6 NPN transistor that acts as a switch to the aforementioned target circuit (which for now is a simple red LED), it works as expected. 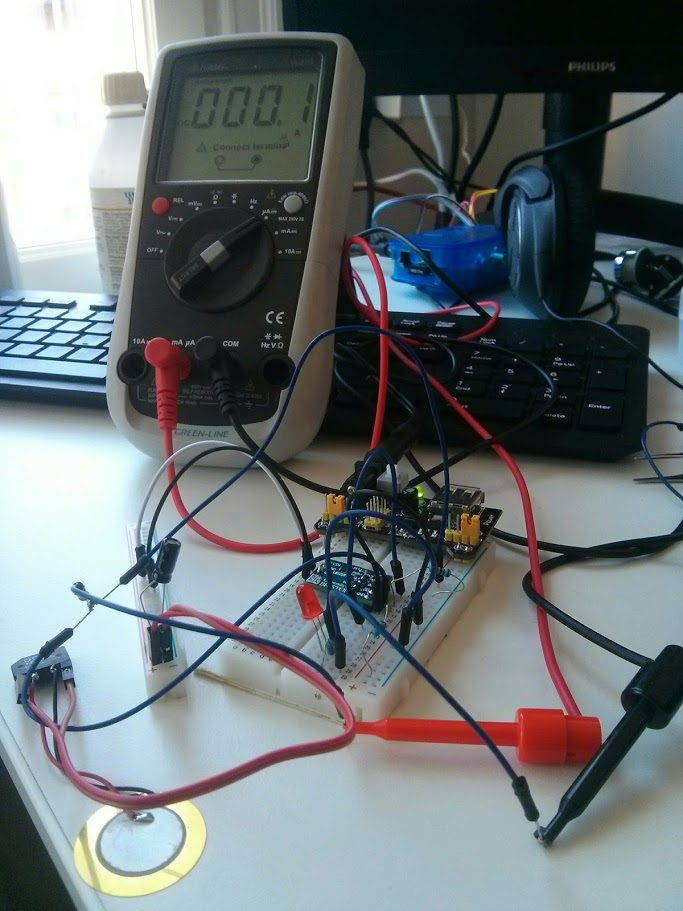 After smacking the piezoelectric component against the table and charging its associated capacitor up to ~500mV, the led turns on, turning off again when stopping the movement with the piezo, as it moves below the aforementioned threshold.

So extra circuitry and/or precious GPIO signals would be needed to latch this setup high while the main MCU wakes up and takes control of the power rail state or as stated by the Bristol team:

“Also you might need to add timing circuits on the gate lines to control turn-on and turn-off delays.”

Then looking at the whole setup and BOM required for it to integrate nicely with my PCB, MikeElectricStuff’s comments start to make a lot of sense:

Conclusion and challenge to Dave Jones

To be fair, the UB20M team has been incredibly responsive, attentive and patient to my requests and questions about the chip and board. I’m very grateful for the time and attention they have put into this experiment, specially since this kind of tinkering is not part of my day job.

Unfortunately, I don’t see the utility of this chip on my particular circuit since:

Now, what should I do with this board? Coincidentally I will be traveling to Melbourne, Australia, in a few days and had the perfect positive trolling epiphany about what to do with this board and who to send it to:

Dave, I challege you to use my UB20M board to save up a few uAmps from your micro current: pico-test your micro-current tester if you dare! 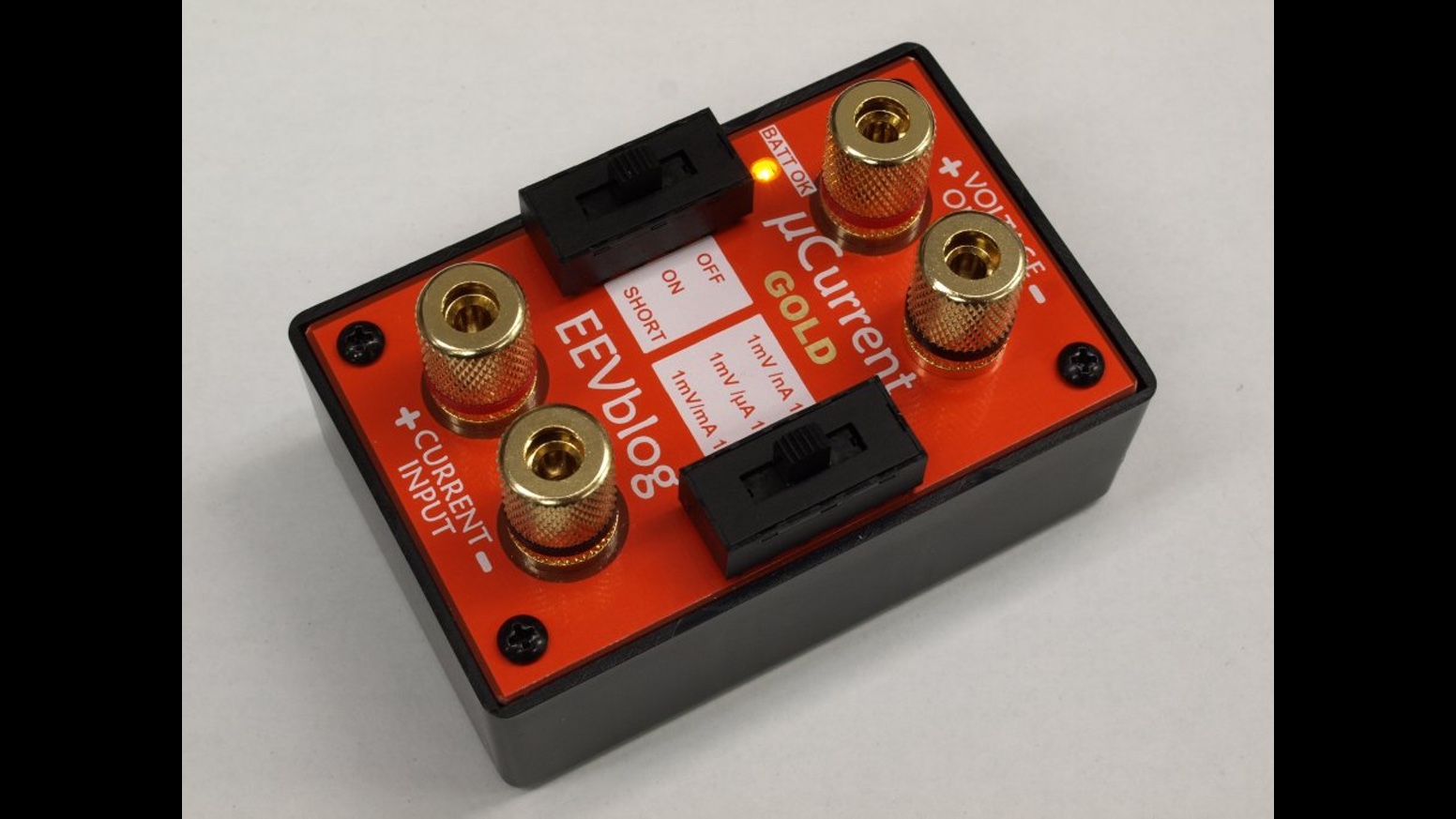 I’m a hobbyist, I don’t have the proper equipment nor money for these kind of low-amp measurements… heck, I don’t even own an oscilloscope as I’m writing this!

If you are up for it, I will send you the board by post to Sydney from Melbourne during my visit ;)